This was a caption I owed to Riatsala. 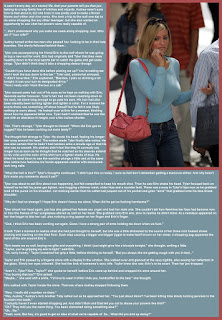 Comments, ratings, and criticism are always appreciated.
Posted by sp2000 at 7:38 PM 2 comments:

One Photo Never Changed a Person

This was a caption I owed to misschinagirl.

Comments, ratings, and criticism are always appreciated.
Posted by sp2000 at 2:18 AM 2 comments:

Hey, everyone! This caption blog has finally received over 8,000,000 page views! And with another milestone, I just want to say thank you to everyone who keeps dropping by this place to check out my newest captions and rereading any of my older ones. I know more recently I haven't been able to update as often as I once have, but as of the time of this post I still plan to keep on making captions.

Thank you all, once again!

I figured I had to make a caption for the occasion for this milestone and luckily I ran across this pic to inspire me. But I ended up writing more than I thought I would so I think I'll end up labeling this as a story. And I couldn't decide on a single title for it either.

"Create Your Own Dream Woman" or "Making a Dream Enter Reality"

Kevin Pearson decided to drop by the arcade in his hometown. There weren't a lot left nowadays outside of the cabinets inside pizza joints and movie theaters and he made sure to drop by often enough to be one of the locals to keep the place in business. Kevin would usually see some newer machines come in with the older ones being pushed into a corner. Deciding on which to play that day, Kevin wandered into one of the corners of the building where he noticed two cabinets he had never seen before placed next to the old broken jukebox that had been there for who knows how long. They had to of been placed there within the past week since he always remembered the jukebox sitting by its lonesome.

Walking over to the front of the two cabinets, Kevin could see the banner artwork displaying the names of each game. They were "Create Your Own Dream Woman" on the left and "Create Your Own Dream Man" on the right. From what the demo reel showed, the games consisted of heavily detailed character customization followed by controlling that character on a pathway, dodging obstacles.

"So it's a ripoff with a gimmick?" Kevin thought to himself as it reminded him of another game, minus the character customization.

The character creation was appealing enough and Kevin couldn't resist the idea creating his own dream woman. He sat down in the chair, popped in the tokens needed and was presented with a highly detailed virtual model of a woman. Kevin thought about the type of woman he liked and the type of woman he always liked to make himself when writing a TG caption on his blog. He went through all the information to fill in on screen.

The information to fill out went on and on. Eventually Kevin got to the point where he could customize the model's face more in depth. He didn't want to make her face too cartoony or have anything exaggerated. After adjusting enough meters for long enough Kevin finally decided he was finished with her physical appearance. Next was makeup, clothing, and accessories. Since this character would be doing a lot of running he figured it was appropriate to have her in running shoes and a sports bra. And he figured a gray tanktop and form fitting blue jeans were a decent feminine equivalent of his gray shirt and jeans. Once everything was done, Kevin was ready to help her through the virtual obstacle course.

"Run toward your new life! Don't let your old self hold you back!" announced a female voice from the speakers placed on the head rest of the chair Kevin was sitting on.

The virtual dream woman then dropped onto a flat road and began automatically running. It was up to Kevin to shift her through the three lanes and jump to avoid any hazards. Kevin was surprised at how easy the game had been so far. He had actually managed to reach a score of one million after dodging things such as traffic ones, open manholes, and parked vehicles.

"Congratulations!" rang the announcer, "You've earned the right to exist! Keep going!"
"What's that supposed to mean?" Kevin wondered to himself.

The difficulty ramped up a bit but Kevin was able to reach two million points. The announcer's voice filled his ear again.

"Congratulations! No one will recall you looking like anybody else! Keep it up!"

The game continued to get more difficult as more obstacles got in Kevin's way--and not just inanimate objects. There were police officers getting in his way now. Strangely enough, Kevin thought all the officers resembled himself. As he passed more and more million digit landmarks, the announcer spoke even more weird remarks.

After each announcement, Kevin could swear the speakers were whispering something into his ears. He shook his head, suddenly thinking about all the information he had given about his dream woman. He then passed a score of eight million points.

"Congratulations! Your new memories are mixing with the old. You're almost there now!"

At this point in the game Kevin was dodging missiles from army helicopters, mutated monsters, and perverted old men, among other things. Another whisper entered Kevin's ears from the speakers. A strange new memory entered Kevin's head: he had a modeling session with a photographer friend in two hours. Since when? Where did that memory come from?

"Oh no!" came the announcer's voice as the character on-screen ran into one of the perverted old man obstacles, starting an animation to play where the dream woman had her rear end slapped and caused her to trip. "Game over! You were so close to getting to getting rid of those old memories too. Better luck next time!"

Kevin saw his dream woman stand up and do some stretches. The various character obstacles stood behind her clapping their hands as Kevin's total score displayed in front of everyone, reaching a score of "8,004,741" points. Kevin was then prompted to enter the full name of his dream woman. He decided to put what he usually used when transforming himself in TG fiction: Kelly Samantha Pearson.

Ignoring what the announcer spoke, Kevin tried to stand up but found himself unable to move. The chair then began to vibrate as more whispers came from the speakers. Kevin lost motivation to remove himself and allowed the pleasant massaging of the chair to consume his body. The hair on his head grew until it was past his shoulders, his appearance becoming more feminine in the process. He lost his masculine physique as his body became smaller, petite, thinner... Soon Kevin was swimming in his clothes.

"Mmm...This is nice." Kevin closed his eyes as he  heard his voice sound off in a woman's alto, makeup painting itself on his female face; the new shape longer able to support his glasses as they fell to his lap, altering to a shiny black handbag and silver smartphone.

Kevin squirmed and crossed his legs as he felt his penis and testicles enter into his body and transform into a vagina and ovaries. A pink sports bra had materialized under her baggy shirt, which had begun to cling to her sexy body, the sleeves vanishing to reveal hairless arms with smooth skin. The cups of the bra soon filled, the tanktop giving a glimpse of the cleavage of her large triple D knockers. With panties replacing her old boxers, covering her new sex, Kevin's pants began to fit her new form, showing off the length of her legs and the shape of her hips and ass. Her shoes and socks then shrunk to better fit her petite feet, the gray sneakers altering to running shoes colored blue and white. 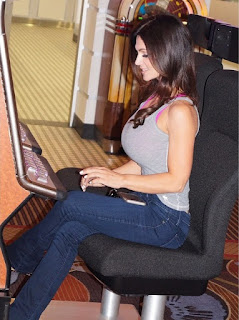 The new Kelly opened her eyes, noticing her white painted nails beyond the huge globes hanging from her chest. She saw a message appear on her phone from her friend asking if she was still going to do the shoot today. Kelly needed the photos for her portfolio so of course the photoshoot was still on. She text a message back and stood up from the chair of the arcade cabinet.

"Wow. That game really did a number on me." Kelly smiled, placing her phone into her handbag.

Kelly felt the sway in her hips and she walked toward the exit of the arcade. She felt so hot and sexy and most of all felt absolutely nothing wrong with it. Anyone watching Kelly leave couldn't take their eyes off her. She didn't even mind returning a smile to those in front of her and giving a little extra wiggle in her hips to those behind her. Kelly figured that was apart of the cabinet's magic or whatever it had used to change her. It was better to feel good about her new form than to start creating a scene about how she was a man who was transformed into a woman.

Stepping outside, Kelly inhaled a breath of fresh air. She was ready to see what this new life had in store for her.

Comments, ratings, and criticism are always appreciated.
Posted by sp2000 at 11:12 PM 4 comments:

A Day in the Park

This was a caption I owed to JaySeaver. 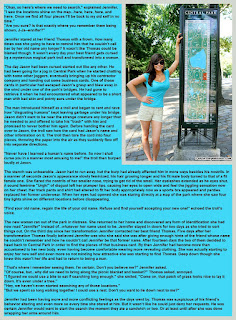 Comments, ratings, and criticism are always appreciated.
Posted by sp2000 at 5:11 PM No comments:

sp2000
I'm just a regular guy who has an interest in this kind of stuff. I have had thoughts of magically transforming into a sexy woman, but I'm fine with who I am. All images in these captions belong to their respectful owners.